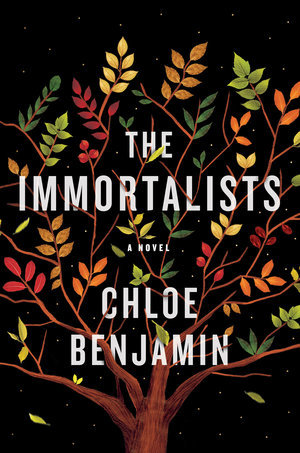 If you knew the date of your death, how would you live your life?

It’s 1969 in New York City’s Lower East Side, and word has spread of the arrival of a mystical woman, a traveling psychic who claims to be able to tell anyone the day they will die. The Gold children—four adolescents on the cusp of self-awareness—sneak out to hear their fortunes.

The prophecies inform their next five decades. Golden-boy Simon escapes to the West Coast, searching for love in ’80s San Francisco; dreamy Klara becomes a Las Vegas magician, obsessed with blurring reality and fantasy; eldest son Daniel seeks security as an army doctor post-9/11; and bookish Varya throws herself into longevity research, where she tests the boundary between science and immortality.

A sweeping novel of remarkable ambition and depth, The Immortalists probes the line between destiny and choice, reality and illusion, this world and the next. It is a deeply moving testament to the power of story, the nature of belief, and the unrelenting pull of familial bonds.

What I loved most about this was the premise: the whole, ‘four siblings living in NYC in 1969 go and visit a psychic that tells them each the day of their death’ thing sounded pretty cool from the onset, and I just knew I had to read it. All of them are told their death day in private, therefore, each sibling does not know the dates given to the others. The rest of the book, told in four separate parts – one for each of them – centres around their lives and events leading up to and including their death days.

I thought that this book was going to have a little more magical realism than it did, however, you don’t really figure out if the fortune teller had any ‘real’ powers or not. If anything, it leans more toward it all just being coincidence and rather, it appears as though each Gold sibling – Simon, Klara, Daniel, and Varya – is the victim of self-fulfilling prophecy. I don’t believe their deaths would have happened on those exact days had they not spent their lives obsessing over what the fortune teller predicted.

The two siblings whose stories I found most interesting were Simon and Klara. I loved how close they were, how their relationship evolved in their youth, and how the death of one affected the other. Unfortunately, those were parts one and two of the book; by the middle and end when I got to Daniel and Varya, I wasn’t as intrigued by what was happening. Since they are the older siblings and the first half centred around the other two, by the time I got to Daniel and Varya, it felt like I had missed some of their major character development. I didn’t get to read about them growing up – it kind of just skipped forward in time to their adulthood’s – so there was a bit of a disconnect for me with regards to how invested I felt in their story lines.

Nonetheless, this book was a thought provoking one. If given the opportunity, I would never want to know my predicted date of death. You’d think that it would have the power to make you live life to the fullest and soak up every moment you have, but as illustrated by these siblings, I think it would definitely freak me out too much! 🙅🏻‍♀️

8 thoughts on “Review// The Immortalists by Chloe Benjamin”