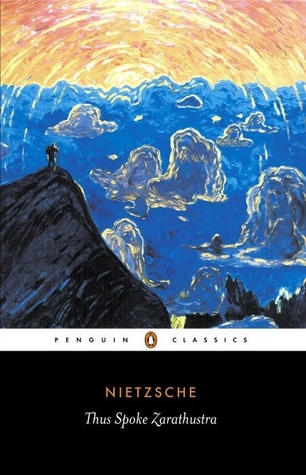 Nietzsche was one of the most revolutionary and subversive thinkers in Western philosophy, and Thus Spoke Zarathustra remains his most famous and influential work. It describes how the ancient Persian prophet Zarathustra descends from his solitude in the mountains to tell the world that God is dead and that the Superman, the human embodiment of divinity, is his successor. With blazing intensity and poetic brilliance, Nietzsche argues that the meaning of existence is not to be found in religious pieties or meek submission, but in an all-powerful life force: passionate, chaotic and free.

The best way that I can describe this book is as a religious experience, which is kind of paradoxical because the main idea of the book is that “God is dead.” When Zarathustra, the ancient Persian prophet, emerges from his 10-year solitude and says that God has died, he doesn’t mean that literally. Rather, he means that the concept of God as a gateway to finding meaning in life is dead and that the meaning of life should be found not in religious worship but within the self as an exemplar of true humanity–the ‘Superman’.

The Superman represents the highest state of man in which he creates his own values and is therefore a powerful master of himself. According to Zarathustra, this version of man has yet to exist, but he speaks of how it can be bred in future generations. The book follows Zarathustra not only as he preaches to his disciples ways in which to reach the Superman state, but also his journey in reaching it himself.

The most interesting part of this was Zarathustra’s discourse of the phases of spiritual metamorphosis represented by the camel, the lion, and the child. The first stage, the camel, represents the carrying of burdens of human existence that are necessary for a person to accept in order to strengthen them for the next phase—it is the weight bearing spirit that pushes itself beyond every limit possible. Upon bearing the weight of existence and in essence outcasting themselves in the desert, the camel realizes that it wants freedom from the traditional virtues it has known; this is where the lion phase comes into play. At this point, the camel has two choices. It can either take the path of nihilism, or the path of creating its own values and meaning in life now that is has rejected traditional values of religion. In order to reach the Superman state, the individual must reject nihilism and in doing so, the lion is realized. In the last phase, the child, the spirt is truly free. This occurs when the lion has elected to start a new life as the master of himself—thus the Superman is attained. I thought that whole analogy was so interesting, and it serves as the basis of the entire story.

Although very dense, the allegorical nature is what really drew me in. I liked that this was something extremely different from anything else I have ever read and it allowed me to see certain ideas in a new light, regardless of whether or not I agreed with them all. I would definitely give other Nietzsche works a read, but I’m sure until then I will be pondering about this one for a very long time.