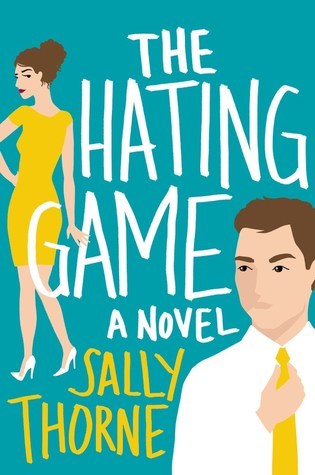 Nemesis (n.)
1) An opponent or rival whom a person cannot best or overcome; 2) A person’s undoing; 3) Joshua Templeman.

Lucy Hutton and Joshua Templeman hate each other. Not dislike. Not begrudgingly tolerate. Hate. And they have no problem displaying their feelings through a series of ritualistic passive aggressive maneuvers as they sit across from each other, executive assistants to co-CEOs of a publishing company. Lucy can’t understand Joshua’s joyless, uptight, meticulous approach to his job. Joshua is clearly baffled by Lucy’s overly bright clothes, quirkiness, and Pollyanna attitude.

Now up for the same promotion, their battle of wills has come to a head and Lucy refuses to back down when their latest game could cost her her dream job…But the tension between Lucy and Joshua has also reached its boiling point, and Lucy is discovering that maybe she doesn’t hate Joshua. And maybe, he doesn’t hate her either. Or maybe this is just another game.

I thoroughly enjoyed everything about this: the hate to love trope, the office setting, Lucy’s sarcasm, Joshua, Joshua… oh and did I mention Joshua? From the very first line of this book, which was, “I have a theory. Hating someone feels disturbingly similar to being in love with them” I knew she didn’t hate Josh so much as she hated that she was in love with him when she was sure he didn’t even like her. It didn’t help that they had been playing enemies for months—they were in too deep for her to stop playing The Hating Game.

Now back to Josh, the book boyfriend you didn’t know you needed. I can’t pinpoint what exactly it was, but there was something about Josh that I adored. Maybe it was the fact that he was able to hold an element of mystery while also being so outwardly nerdy and predictable—I mean, the fact that he wore his dress shirts in a specific sequence throughout the week is a little weird, but hey I could look past that for Josh. Probably says a lot more about Lucy that she took the time to memorize them all.

Sometimes I find the romance genre a tad annoying because I think it inaccurately portrays the average male that all women want as tall, dark, and handsome with a very ‘bad boy’ personality and if you swoon over that, that’s great, but I need a little more substance to remain hooked on a love interest. Yeah Josh was tall, dark, and handsome, but even if he weren’t, he still had a lot of little quirks that took him beyond lust territory. Sally Thorne got it right—a weirdo nerd could also be pretty swoony sometimes without it being mutually exclusive from them being attractive… and just because they are a weirdo nerd, doesn’t mean they are an actual weirdo who girls are automatically creeped out by. I liked Josh because you didn’t want to just stare at him from the next cubicle over and fantasize about him; you actually wanted to get to know him and force a smile out of that stupid poker face of his.

The banter between the two main characters was also unparalleled. The sarcasm levels were real, and I basically survive off oxygen and sarcasm so I was living for it. Both of these people had a sort of firecracker in them that would be unleashed after being provoked by the other, but it was never really malicious. I found the comebacks hilarious, and it made me fly through the book.

I loved this a lot and I couldn’t recommend it enough! If you are looking for a good romance, keep this on your radar.

16 thoughts on “Review// The Hating Game by Sally Thorne”