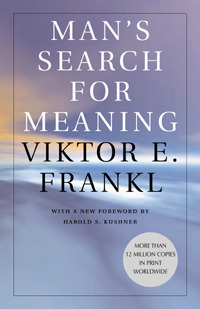 Psychiatrist Viktor Frankl’s memoir has riveted generations of readers with its descriptions of life in Nazi death camps and its lessons for spiritual survival. Between 1942 and 1945 Frankl labored in four different camps, including Auschwitz, while his parents, brother, and pregnant wife perished. Based on his own experience and the experiences of others he treated later in his practice, Frankl argues that we cannot avoid suffering but we can choose how to cope with it, find meaning in it, and move forward with renewed purpose. Frankl’s theory-known as logotherapy, from the Greek word logos (“meaning”)-holds that our primary drive in life is not pleasure, as Freud maintained, but the discovery and pursuit of what we personally find meaningful.

This year, I have been really wanting to branch out in my novel choices, especially trying to get into more nonfiction and philosophy. What better way to do that than with a book that encompasses both?

This book was about the author’s experience in the concentration camps and how maintaining his optimistic attitude and thinking about his purpose in life, being the thought of seeing his wife and family again, got him through the horrible experience. He survived four years in four different concentration camps; afterwards, he developed a theory based on the search for meaning called logotherapy. Its basic premise is that people find meaning in their lives through the pursuit of purpose. For Frankl, his purpose of the prospect of seeing his pregnant wife again kept him going.

It was really sad to read about some of the stories he shared of his and others’ experiences in the camps. Something that I did not know was how high the suicide rates were; I guess they kind of shielded that aspect from us in school and I never really gave it much additional thought. Once people stopped finding meaning in their lives and thinking they had nothing to live for, they would not see the purpose of going on. I truly can not even imagine having to go through the horrors that Frankl faced, let alone keeping alive meaning and purpose in the process. This was a very inspiring, beautiful, and eyeopening book and I’m glad I chose to pick it up, especially because I learned a lot about myself and the world from it.